In order to obtain even greater power, one must set aside their humanity, and become a Ghost; this is the principle of being a Sura. In order to become an absolute martial artist, one must forget their weakness; weakness of being merciful to their enemies. By walking the lone path, they further increase their prowess, and by forgetting their humanity, they become weapons of war; relentless, merciless, ruthless. If you ever have to face a Sura in battle, prepare, as the last sight you will be seeing are the Gates to Hel.[1][2]

In some versions of Ragnarok Online, this job class is translated as Shura, which is an Arabic word that is related to the Quran and Muhammad.[3]

When Surt reemerged, some Monks abandoned their duty as loyal servants of Odin and chose to seclude themselves to further develop their physical prowess. They were looked down upon as "God's Traitors" or "Power Monger," but these Monks offered no excuses for their actions. They renamed themselves Suras and simply continued their training.

Most Suras practiced for many years to expand their skills. Unlike normal Monks that specialized in one-on-one close combat, Suras focused on kick combinations and multi-targeting skills as their unique areas of expertise.

When the Suras returned to fight the inconceivably powerful and otherworldly monsters from the Ash Vacuum, the people finally acknowledged their new strength and welcomed them. The Monks also came to appreciate the path that the Suras had chosen. Inspired by the Suras' powerful skills, many Monks volunteered to study under the Sura masters and joined them.

Suras had already grown much more powerful, but still they did not allow themselves any pride or self-satisfaction. They steadfastly continued their training and discipline, day and night. Their endless effort and good deeds expressed the righteousness in their hearts and they eventually changed people's prejudices about them.

Everyone nowadays, including their critics, honor the Suras as the "Gods of War."[4]

As former worshippers of Odin, only Normans can become Suras. 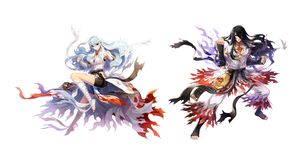 Suras can only equip gear designated as:

Suras can utilize the following weapons:

Suras are the highest tier on the Monk job path and cannot advance any higher.