Despite its name, the Sword of Shadows is actually a dagger. It has the ability to become a sort of hook-shot, allowing the user to latch onto rough surfaces and swing to unreachable places or dodge attacks. It can also be thrown like a normal dagger.

Its only known owner is Loki, who uses it in tandem with a matching dagger that has similar functions. 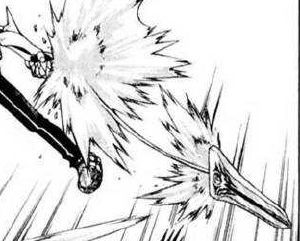 The hook-shot feature of the dagger.
Retrieved from "https://ragnarok.gamepedia.com/index.php?title=Sword_of_Shadows&oldid=201961"
Category: