Thieves are quick and clever individuals whose ability to take what's not theirs is a specialty.

The Thief is hard to convey. Anyone who has stolen something in an area is called a Thief on the spot. And so the title for the first type of thieves was born. Abandoned as an orphan before being able to know the face of their parents, Thieves had always been poor in their backyard. So it was another opportunity for him (or her) when the announcement came for the recruitment of adventurers by Tristan III, Lord of Rune-Midgarts.

When more thieves came about, a leader rose who then formed the Thief Guild. In the act of thievery, killing and/or stealing from the poor and weak are unacceptable. If the guild rules are broken, the guildleader will judge the violator in an unimaginable way. Though Thieves may not have the strength for intense combat, they do range in dexterity and quick movements that can help in the battlefield. When you choose the path as a Thief, it is very hard to gain back the respect of the public, as civilized society is no more to you.[1] The physical strength of a Thief is low, so hard marches and fierce battles are impossible. However a Thief will dig into the hysterics and distract the enemy and avoid the enemy attacks.[2] 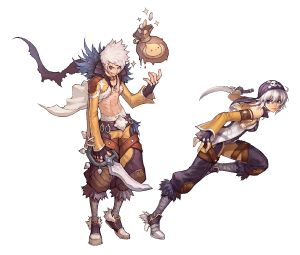 Thus far, only Normans are known to be Thieves.

Thieves are only able to equip gear that is designated as:

Thieves are able to use the following weapons:

Thieves can move on to become either an Assassin or a Rogue.

Thieves can move on to become either an Assassin or a Rogue.