The Toy Factory is a factory that produces toys for all the girls and boys of Midgard. All those who worked in the factory must wear uniforms and have their identification cards while on duty. 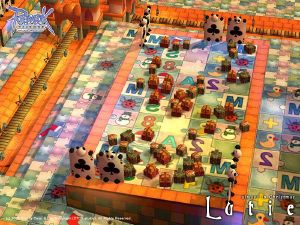 All of the people of Lutie once worked in the Toy Factory. However, they couldn't earn a living packaging toys forever. Villagers began leaving the factory one after another and the situation got tough. An employee name Catherine Jet Johnson was working as the assistant of one of the dollmakers who continued to make dolls until the very end.

On the day it was decided that the factory was to be closed, the dollmaker shed tears as he dressed his last doll. He thought his days as a dollmaker was over, so he named the last doll Celine Kimi and then stopped all the lines in the factory. It is suggested that the dollmaker's dedication to his craft breathed life into Celine. However, soon after Celine came to life, other toys in the factory came to life as well. With the toys thinking they were employees, the factory began functioning again, although not the same way it did before.

After the factory shut down, Antonio came and stole all the toys inside it. Santa Claus discovered what he was doing and demanded that all the toys be returned to the factory, even though the factory doesn't have an owner anymore. Antonio is eventually caught and cast out of the factory.[1]

Factory No. 1 is the area that was used to store toys and dolls before being given away as presents. It's possible this area served as a sort of quality control to make sure all factory products are approved for distribution.[2]

Factory No. 3 is the area where all toys are sent to be delivered.[4]