This is a listing of features that were supposed to be in Ragnarok Online II, but were either unimplemented entirely, taken out of the game, or implemented incompletely.

The Gate of the World[edit | edit source]

Since The Gate of the World was the original version of RO2, every feature that was planned for this version of the game should be presumed as removed status.

The developers designed the game around the ability for players to not only level their characters, but their weapons as well. In doing so, this would allow player weapons to become as strong as the characters themselves, removing the need to constantly switch out obsolete weapons for better weapons. A major drawback of this system is that it eliminates weapons from the market as players would have no incentive to buy new weapons when their current one would suffice them for the entirety of the game. This concept was abandoned in the remake.

In the original version of RO2, the developers wanted to replace the Poring with the Pukui as the game's mascot. Despite the Pukui gaining some interest from players, Poring still reigned supreme when it came to being the Ragnarok mascot. The Pukui was reintroduced into RO2's remake as a mob with the Jawaii update as well as the Tontong Pukui and Pinky Fat Pukui Hat headgears and the Developer Pukui backpack.

The Ellr was an alternative race designed to appeal to Asian players. To differentiate from the Norman and Dimago, the Ellr was designed to utilize stone items to customize combat and player performance, removing the need to create distinct job classes like what was done with the Norman race. When RO2 was remade, the Ellr concept was abandoned in favor of creating the Noel race.

The Dimago was an alternative race designed to appeal to western players. To differentiate from the Norman and the Ellr, the Dimago was designed for more flashy combat and dynamic skill trees. When RO2 was remade, the Dimago was remade as a killable mob for players to hunt down during the beta tests. The Dimago was eventually removed from the game entirely and the concept was replaced with the Noel race.

Legend of the Second[edit | edit source]

Back when Artisan was originally known as the Tailor, the development team wanted to implement a feature that would allow players to customize their characters' outfits in a way no other MMORPG was able to do. The Tailoring System, or Jigsaw System, was meant to allow players to customize pieces of their character's outfit so they could mix and match accessories, attachments, shirts, pants, etc. to create outfits that are unique to each individual player (hence the nickname "jigsaw"). Limits would be put into place to prevent players from creating R-Rated outfits.

With the Tailoring System, players would be able to upload texture files that would be applied to certain parts of their character's outfit. This system would only be applicable on cloth armor so metal armor classes (Swordsman classes) would miss out on enjoying this feature.

Based on early Closed Beta Test screenshots, the system was implemented in the game early on, but was later taken out before launch.[1]

One of the most requested suggestions from the RO playerbase is the ability to vend offline. With that, Gravity developers originally planned for such a system to exist in RO2. When players log off while vending, their character will become an NPC and continue vending until the player logs back in. A safeguard would be in place to prevent the character from vending in dangerous areas so the player won't have to worry about vending in the middle of battle if accidentally disconnected. This concept was eventually thrown out in favor of the Auction Hall.[2]

In order to replicate the ability to create weapons and armor with various effects and bonuses (similarly to carded weapons and armor in Ragnarok Online), the developers planned to allow players with the Blacksmith profession to forge such equipment with the use of monster spirits. Blacksmith players would be able to apply monster attributes to not only blank weapons, but also broken weapons as well.

It is unsure if this system ever made it into the game during its closed beta test as it is absent upon launch.[3]

Job classes in RO2 were originally planned to have similar, if not the same, weapon flexibility as RO job classes. In addition, job classes were to have their trademark skills from RO in order for players to retain their connection to their favorite job classes in RO2. Warriors were meant to be able to use all kinds of melee weapons and Rogues were planned to utilize armor and weapon stripping skills similarly to their RO counterparts. Thieves used to have a Steal skill while Wizards had a Storm Gust skill.

Somewhere along the way during Korea's closed beta tests, these concepts were simplified and certain skills and weapons were restricted or removed from various job classes. This has resulted in a very watered-down version of RO's core job classes while downgrading new job classes (Warrior) to be less appealing than they were before.[4]

Early on in RO2's development, Archers were able to choose from Ranger or Hunter as their 2nd Class job. The Hunter would be different from the Ranger in that it would use guns over bows and arrows and it would have access to pet assistants.[5]

The Hunter concept was eventually reimagined as the Hunter Union and the job class itself was revamped into the existing Beastmaster job class. Some speculate that the Gunslinger job class will be reintroduced to RO2, making gun-wielding Hunters redundant. Another theory remarks that the Gravity developers were unable to make assisting pets work in RO2 as they do in RO.

Originally, RO2's Alchemist life job was known as Doctor (alongside Tailor, which was later revamped as Artisan). As their name implies, the Doctor specializes in healing potions and medicines.

The life job was later revamped as Alchemist since it was too limiting as Doctor.[6]

Players can build a tent out in the wild to restore their party's status and give them a Save point outside of town for a period of time. Players can also use it as a extra group storage while hunting. But watch out! These are able to be torn down by wild mobs...so it's advisable to keep your fire out at night. So in short, the camp you set up will have a its own HP base.[7] This feature was absent from RO2 upon launch and shows no sign of being implemented.

Rebirth (known as Transcendent) and 3rd Class Jobs were originally planned for implementation into RO2. However, instead of the Rebirth process forcing players to start all over again from Level 1 (like how it is in RO), the developers wanted to make it part of the process to change to 3rd Class. This is because the developers felt that making players start all over again to become a Rebirth character in RO2 would be too hard and impractical.[8] This concept was replaced with the Master Level System.

It is unknown exactly how the Order/Chaos portion of the Khara system will affect characters. All that is known is that the style of gameplay between characters of different alignments will be unique to each alignment. This concept was replaced with the Master Level System.

Life Job guardians were initially planned to give their summoners special buffs and access to skills that are exclusive to each life job. The guardians provide buffs when summoned, but it does not give players access to special skills as originally intended.[10] It is unknown if this feature will be released in a future update. 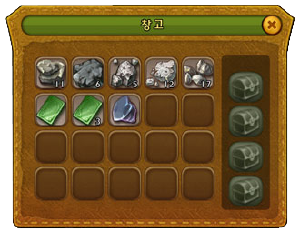 Initially, Kafra Storage in RO2 mimicked the bank storage system of World of Warcraft where players can expand storage by utilizing storage tabs. The Kafra Storage was later modified to be reliant on Kafra Shop storage expansion.[11] 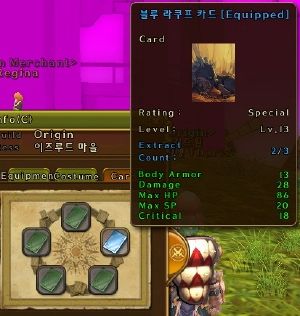 RO2's card system originally mimicked that of RO's with cards having various effects to help players customize the performance of their characters. But some time before the official launch of RO2, the card system was redesigned to only give stat boosts, removing special effects from every card in the game. It is unknown why the card system was simplified so significantly.

According to the now dead RO2 Database fansite and Gaming Base, monsters originally had RO-like elements assigned to them (water, earth, fire, wind, poison, saint, dark, psychokinesis, and death). It is unsure why the original elements were dropped in favor of the current Elements.