This is a listing of features that were supposed to be in Ragnarok Online, but were either unimplemented entirely, taken out of the game, or implemented incompletely.

How the day/night cycle looked in the game.

Originally, the game was to have a day and night cycle like many other MMORPGs on the market. It is uncertain how the cycle would affect the world of the game, but it could be that monster spawns would change depending on the time of day or certain events would happen at certain parts of the day.

Based on screenshots from the Korean servers (kRO), the system was on their servers so it was in the game for some time. It is unknown as to why it was taken out.

In addition to the day/night cycle, RO was supposed to have a weather system as well. This would work in tandem with the day/night cycle in order to enhance certain abilities as well as affect monster spawns. It's explained that the system would cycle between hot weather, snow, and rain to create distinct conditions that would be favorable to some players and monsters at certain times of the day.[1] Remnants of this system can be seen every winter when the cities of Prontera and Payon receive temporary snowfall visual effects.

The game initially had a small handful of hair styles available to players. Technically, keeping animated hair in the game would've easily been done by releasing newer ones in small batches so the developers wouldn't be overwhelmed by animating large numbers of hair styles at a time. It is unknown exactly why animated hair was ultimately taken out of the game. It could have had to do with the original developers and lead designer jumping ship early on in the game's development. Since the more recent developers were probably unfamiliar with working with 2D sprites, the animated hair was taken out and replaced with static hair so they would blend in with the unanimated newer batches of hair styles that were later implemented.

Another possible reason could have been difficulty in having animated hair properly interact with each individual headgear. Since most players would be wearing headgear of some kind, the developers could have thought it wouldn't be worth it to keep animated hair in the game since most headgears would cover them up. 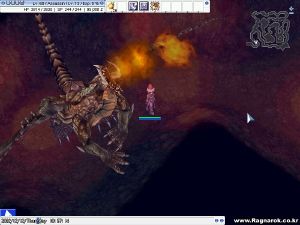 A polygon dragon in Payon Cave.

The developers tested the idea of having some monsters (most likely MVPs) rendered in polygons in order to further distinguish them from other monsters. The concept didn't work likely due to how the 2D targeting system in RO would be hard to use on a 3D target.

However, the War of Emperium castle guardians have remained in the game. 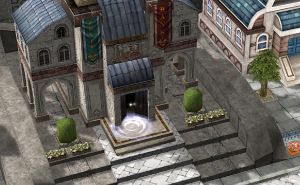 A bank was implemented with the Lighthalzen update in that particular city. (No other city in the game had a physical bank.) It was quickly taken out after reports from players saying that some of their Zeny disappeared when deposited into the bank. Instead of a fix, the banking system was simply never re-implemented. The building that houses the bank in Lighthalzen remains, but every NPC inside will respond with something to the tune of "this system is not implemented yet" if spoken to.

A typical mailbox in the game.

The mail system was not introduced into RO until much later after launch. Despite reports that players were using it to duplicate items and money, it remained in the game for several years. In time, Gravity Co. completely removed the mail system from all versions of the game in order to put a stop to the exploits.

The old mail system was eventually replaced with RODEX.

Introduced some time after the Episode 11 updates, the Auction Hall was only accessible via a Kafra Corp. employee located in Prontera, Morocc, Juno, and Lighthalzen. Although it basically functioned like auction houses in many other MMORPGs, there were several factors that led players to not use the auction hall at all:

Ferus Mounts are special dragon mounts that are exclusive to the Rune Knight job class. Originally, the Rune Knight was to have 5 different colored Feruses to choose from: green (default), red, blue, black, and white. When the original Rune Knight design was discarded in favor of the current one, the original Ferus mounts were abandoned as well.[2] 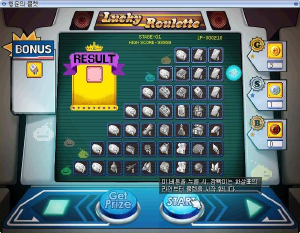 The Lucky Roulette window in RO.

RO's version of RO2's Phantom Pyramid is called Lucky Roulette. Players can access it with the /roulette command or via a UI button. It basically works the same way as the Phantom Pyramid in mechanics.

Unfortunately, after only 5 months of use, GRAVITY decided to terminate the mini-game entirely due to the rewards devaluing many in-game items.[3]