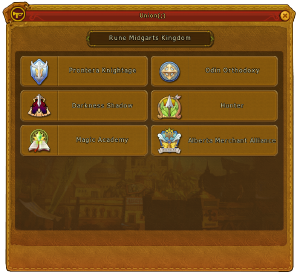 The Union window in RO2.

Unions are special organizations that are similar to guilds. However, unlike guilds, players earn Union Points within their chosen unions and are rewarded by how much contribution they've made to the union.

Just like guilds, players can leave a union and join another union anytime. However, there is a 48-hour cooldown between leaving and joining another union. In addition, players must be at least level 50 in order to join a union.

There are currently 6 unions available for adventurers to join. You do not have to be a job class of that union in order to join (i.e. a Warrior can join the Hunter Union).[1]

Once you join a union, you can earn Union Points, which can be spent on exclusive permanent costumes among other useful items.