Continuing on with my RO Revamps, I went and did a character window revamp. 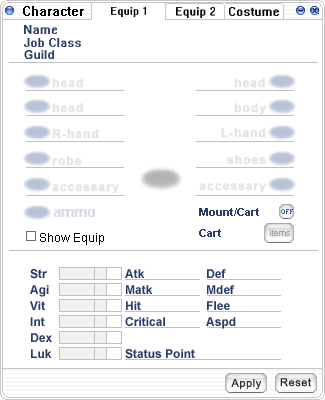 Combining the old Status window with the Equip window was one of the best changes to the game's UI that kRO did. It made complete sense since players depend on both stats and gear to improve their characters' performance. Instead of having to open 2 windows to adjust character stats, players can now open just one window to do so, freeing up more options for hotkeys.

In this revamp, I took the update a step farther and merged the information altogether in a seamless window. Mimicking the character window of modern MMORPGs, I took the Guild name information and put it up top and added space for character name and job class. I also added a slot for ammunition because I for one am tired of having to use a hotkey to equip and unequip ammunition items when I'd rather just take them on and off like any other equipment. I moved the cart inventory button off the character display in the center and put it off to the side (it'll be greyed out for any character that doesn't have the Pushcart skill). I also did the same for mounts and carts.

(And yes, the Equip 2 (Shadow Gear tab) and Costume tabs are just wishful thinking in that kRO would actually add pure vanity Costume gear to RO instead of a second set of equipment gear on top of the base equipment.)

I'm well aware that a future update of RO will split the window back into separate Status and Equip windows. Why on Midgard would kRO take a step backward in this regard? Who knows. They both still rely on one another for character performance so it makes no sense at all to split them back up.