Decided to see what RO would be like if the UI was modernized with common MMORPG UI features. 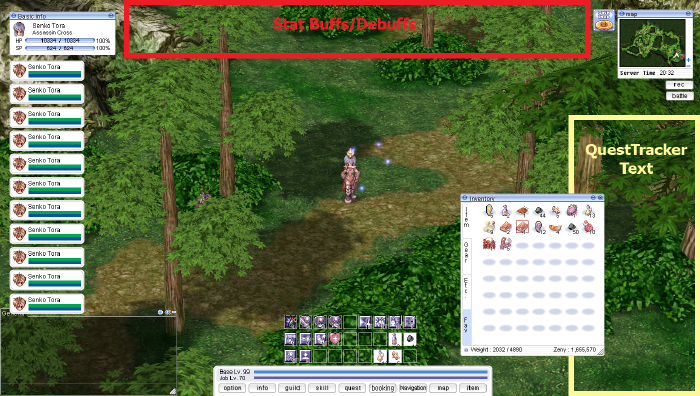 The problem with RO right now is that a lot of its features go unused because the UI doesn't do a good job of advertising them. At all.

Buff/Debuff Display - Currently in RO, buff and debuff icons are displayed on the right side of the screen. This is a bad position for them because the game's window does not have much vertical real estate for the amount of buffs and debuffs a character can have. That is why modern MMORPGs put the icons on the top row of the screen: you get more real estate going horizontal (especially with widescreen monitors) and it's an easier line of sight when switching between looking at your character in the center zone of the screen and then glancing up to see what buffs and debuffs are on your character.

Basic Info Window - Modern MMORPGs have this simply showing your character's HP and SP. Reason being because it acts as part of the party system when it's activated (as you can see). Currently in RO, this window is used as the menu window, which makes it very cluttered and puts its features out of sight (and therefore out of use).

UI Bar and Transparent Hotkeys - By taking the menu buttons and EXP bars out of the Basic Info Window, I put the information at the player's fingertips for quick access and MUCH better advertisement of RO's features such as the questlog and party booking. I've also made the hotkey bars transparent so they don't obscure too much of the center zone of the screen.

Chat Box - The current width of the chat box in RO has bothered me for a very long time because it takes up SO much horizontal space at the bottom. Cutting it in half allows it to be easier to read through because your eyes aren't darting back and forth so long.

Map Window - I've added a MUCH-NEEDED server time display for players who don't live in the same region as the server. This makes it easier for players to keep track of time-sensitive things in the game such as quest timers and MVP respawn time.

Inventory Window - I relocated the Weight and Zeny display from the Basic Info Window here because it just makes more sense. When I'm adjusting my character's weight, I don't want to have to open 2 windows to do it. Same when I'm trying to see what I have in my inventory and want to track how much money I have to spend. I've also simplified the Lock Item Drop checkbox into just a lock icon next to the Weight display.

I'm well-aware many RO players are very much against modernizing RO in any way, but there is a reason why modern MMORPGs use basically the same UI. It just works. 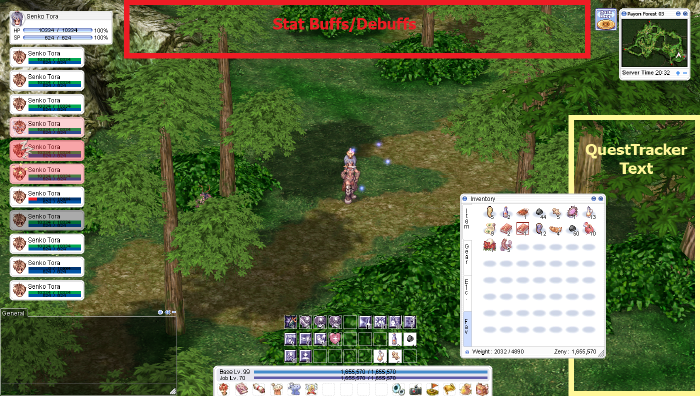