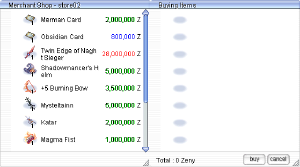 A typical Vending window in RO.

The Vending System is a commerce system that allows players to set up their own individual shops and vend whatever items they have to passing players. Though slowly becoming obsolete as more and more MMORPGs adopt the auctioning system, there are some pros of the Vending System that make it more preferable over auction halls.

Unlike the auctioning system, vending is completely free and doesn't force the player to pay a fee to use. In addition, vending players can set up shop almost anywhere, much more convenient to access than auction halls, which are limited to towns and cities. However, the biggest downside to vending is that it requires players to be online to function, which can use up time that could be used to actually play the game.

In RO, the Vending System is limited to Merchant classes and cannot be utilized by any other job class. (On the flip side, non-Merchant job classes can use Purchase Shops to buy what they need.)

In order to vend an item, a Merchant class player must use the Vending skill to open up the vending window. Only items placed in the Merchant player's Pushcart (separate from player's Inventory) can be vended. The original maximum vending price was 99,990,000 Zeny, which has since been increased to 1,000,000,000 Zeny.

When vending, Merchant class players can put up a stack of items for sale and the price listed is the individual item price for that stack of items. For instance, when a buyer opens up the vend window and selects a stack, the buyer can choose how much of that stack they wish to purchase and the window will calculate the total by multiplying the set price by the amount bought.

For players wanting an easier way to browse player vends, Window Shopper Catalogues are available from catalog vendors for 200 Zeny each. Each catalog searches for an item on all vends active on the current map that the user is in.

Unlike RO, the Vending System in RO2 can be utilized by any character in the game regardless of job class. The default hotkey to open the vend window is Y.

In addition to selling items, players in RO2 can also sell their crafting abilities among other services. When clicking on the Crafting tab, for instance, players can add whatever crafting recipes they've already learned and buyers would be able to obtain crafted items from the player. (NOTE: When selling crafting items, the player must already have the materials required on hand to create the final product. When the player's supplies run out, buyers would not be able to buy the crafted item anymore.)