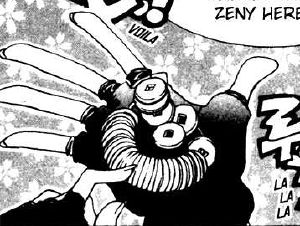 Zeny, as it appears in the manhwa.

Zeny is the main currency of the Ragnarok universe. Everything from food, clothing, and weapons cost zeny. A subunit of the zeny is rupi (translated as ruperos in the English release of the manhwa) of which 1,000 rupi = 1 zeny.

Monetary symbol for Zeny as depicted in the manhwa.

In Ragnarok, Fenris noted her disdain for having to pay 30,000 zeny for a prophet medallion while Iris once exclaimed that 5,000 zeny could supposedly feed a family for months. Therefore zeny in the hundred ranges are considered moderate to poor financial status with 50 zeny being very much dirt-cheap (as seen when Lidia tosses Ses an Idunn's Hound, which was in deplorable condition).

Zeny in Ragnarok Online followed similar pricing ranges to Ragnarok (according to NPC shops), but the inflation caused by gold farmers have bloated these numbers to insane levels.

In RO, players can only see their zeny amount through their basic information window. The maximum amount of zeny any one character can hold is 2,147,483,647 zeny (the maximum number for a 32-bit unsigned integer). Although zeny can be banked and stored in RO, it is still difficult to possess more than 2.1 billion zeny on one character without creating extra characters to act as pack mules.

The Zeny (gold) and Rupi (silver) as they appear in RO2.

In Ragnarok Online II, players use both levels of currency from the manhwa: the zeny and the rupi. The exchange rate is 1 zeny for every 1,000 rupi.

In RO2, players can see their monetary earnings via the game interface (underneath the bag icons). Zeny is denoted as a gold coin while rupi is denoted as a silver coin.